This tune, Da Clipe, (Scottish slang for tattletail), was composed  at Valley of the Moon Scottish Fiddle Camp in 2010. It was written while sitting on the bank of a stream under the wondrous and magical Redwood trees of Northern California.  I was watching the water fall around a large boulder in the middle of the stream and this tune was born... 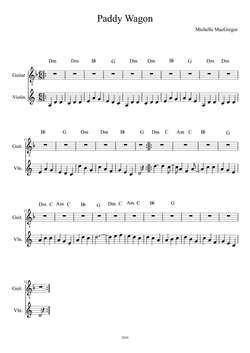 After returning to Minnesota just after writing the tune Da Clipe, I had a gig with The Hounds of Finn.  As we were in warm up mode, we began to jam on a few chords. I had just written Da Clipe and it was fresh in my head.  This tune was written, spur of the moment, during sound check. It was later fine tuned and put with Da Clipe on our CD "Songs of Men in Boats". 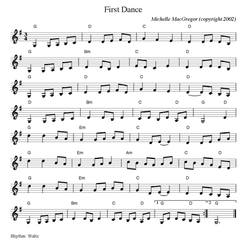 While playing a wedding reception dinner in Estes Park, Colorado, Michelle and  Guitar/Bouzouki player Sean Sutherland, of Asheville, NC took a few minutes away to just play to the beauty of the night. This tune was composed as a result. One minute we were  just heads down playingt to the woods while the wedding party was inside having their dinner, and the next minute the Bride and Groom were dancing to our new waltz.... A beautiful memory for a lovely waltz, First Dance